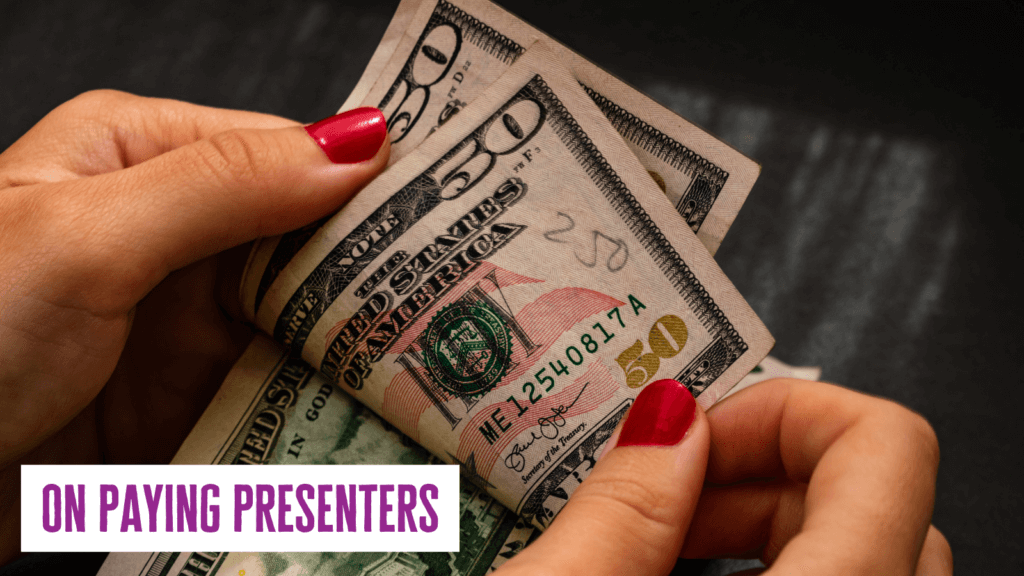 1) Teaching really is a skill that is SEPARATE from whatever kinky activity or concept being taught. Someone who might be really really good at flogging (for a basic example) might not know how to break down the why’s and how’s of being really really good at flogging. That makes a huge difference between a class & a performance. When people come to a class they want to *learn* something that they can then use. When people go to a performance they’re content to just watch someone show off a skill. I find that frequently the two are confused.

2) There ARE events and business that pay for services. When I launched Kink Academy it was exceptionally important for me to offer payment plus a 50% affiliate program for educators so they could *continue* to profit from their involvement on the site. When I first started I actually had to talk some presenters into taking the money (because they said it was their community service). This decision was based on integrity and I’ve always said that integrity is the most expensive personality trait, but it’s worth EVERY PENNY.

3) I fully agree with the statements about how someone is willing to pay hundreds of dollars for a toy (which is not a dig at toy makers, they have a right to profit from their hard work too) but won’t pay $25 for a class to learn how to use it properly. Just take a look around at any public dungeon and you’ll see people with a huge bag of toys and little visible skills and you’ll see how prevalent that is. I’ve struggled with this on Kink Academy too. If I had $5 for every time I was told that I should be offering the site for free, well, I’d actually have money in my pocket by now.

4) Value should beget value. What I bring (and what Mo brings and so many others) to the table is valuable. For a community that is so big on ENERGY EXCHANGE it’s always been fascinating to me that the same concept doesn’t hold true for education.

6) I also agree with the idea that it’s perfectly appropriate to set your own fee’s and then simply decline events that can not meet them. I know full well that decision will limit the number of events that a presenter would go to, but it’s worth it if, together, we presenters stuck to it. Events would be forced to change their structure simply because they wouldn’t be able to have enough skilled & well known presenters to teach.

Ok, so this is quite long enough (perhaps more than enough :) but it is a topic I am passionate about.

Support the Kink Economy people and you’ll see the quality of your own experiences raise above and beyond the amount of money you’ve spent!